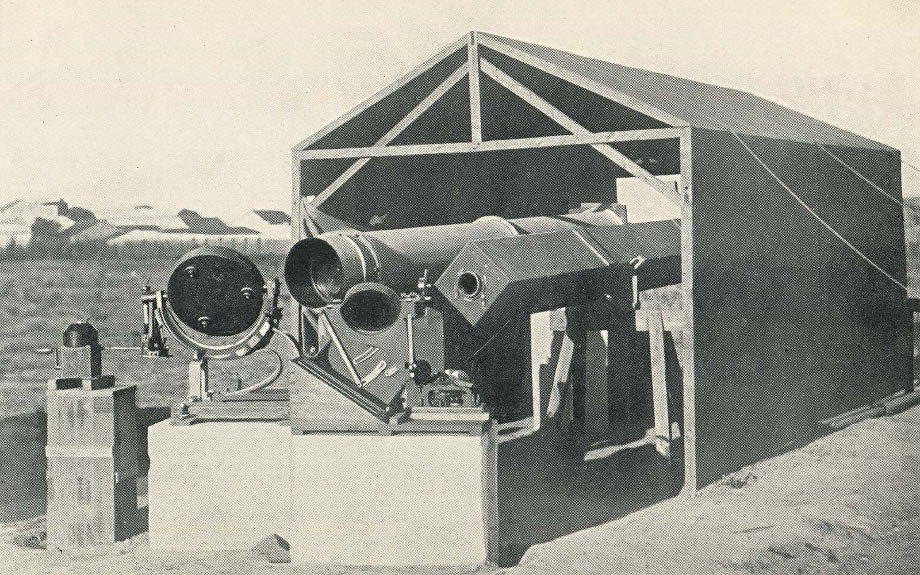 Having arrived in Sobral, Crommelin and Davidson selected a convenient site for their observing shed just in front of the house where they were staying. Located on the race-course of the Jockey Club, their chosen site had the advantage of a nearby covered grand stand that they were able to use for unpacking, storage and preparatory work.

The image above shows the Royal Observatory's observing site on the race-course at Sobral. The two horizontal tubes in the shed are the two photographic telescopes mounted in their observing positions. The 13-inch object glass from the Astrographic Telescope at Greenwich is mounted in the (circular) tube on the left. The 4-inch Cortie lens is mounted in the (square) tube on the right. The two coelostats used with them are mounted on the plinths in foreground (which are aligned north south). The object on the pillar on the far left is the driving clock for the larger of the two coelostats.Its job was to turn the mirror so that the Sun's light continued to be reflected into the telescope as the Sun moved across the sky. This photo by Charles Davidson is provided courtesy of Graham Dolan.

Three days before the eclipse, it rained heavily settling the dust and clearing the sky. Totality started at about 9 in the morning. The day started cloudy and then cleared during totality except for a minute in mid eclipse, when there was thin cloud. The thin cloud reduced the brightness of the Sun, enough to show a large prominence on the limb on one of the their plates.

Seven out of the eight images taken with the 4 inch Cortie lens showed star images. When measured back at Greenwich, they provided excellent confirmation of Einsteins prediction as well as it’s expected variation with distance. One of these plates with some of the stars marked is shown here.

The 19 plates taken with the astrographic lens were very disappointing, the star images appearing diffused and out of focus. This was put down to the distortion of the coelostat mirror caused by the heat of the Sun. Assuming the blurring was due to a change of focal length, gave a result close to Newton’s, while assuming the focal length had not changed, gave a result closer to Einstein, both with such a large uncertainty that the results were discounted.

After the eclipse, the Sobral group packed away their equipment and went back down the coast to Fortaleza, returning on 9 July, when the stars they had observed around the Sun would be at the same altitude but in the dark pre-dawn sky. They set up their equipment and took more plates, to compare with the eclipse plates. One plate was exposed with the plate back to front, meaning that the star light passed through the glass before forming an image in the emulsion. This plate was then placed emulsion to emulsion, first with the eclipse plates and then the star field plates and the differences in star positions were measured. Images obtained before dawn with the astrographic lens were found to be in perfect focus, suggesting that the problem had indeed been with the coelostat.

The Sobral team finally returned to Greenwich on 25 August.