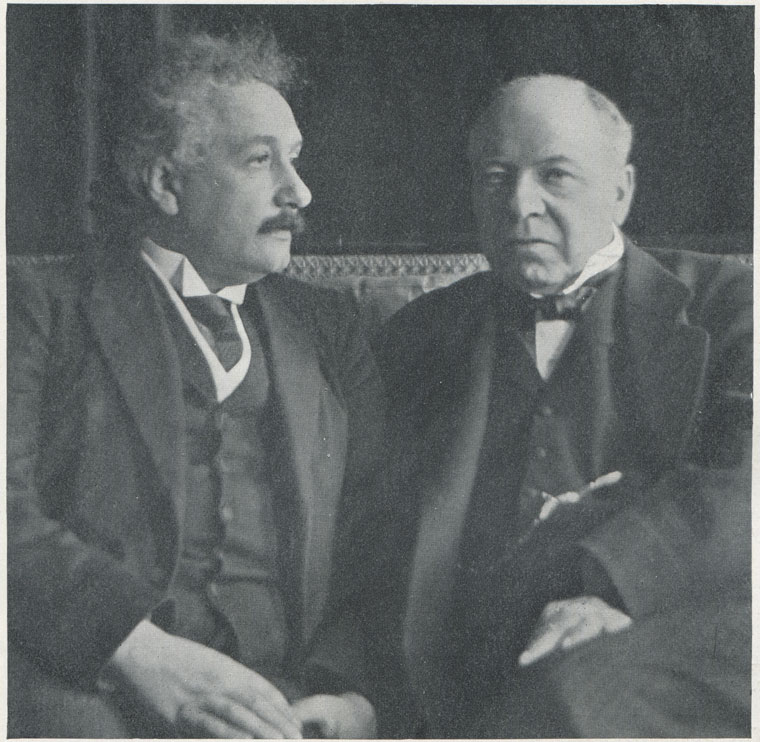 Einstein (left) and Haldane. From a photo by Walter Benington. Originally published in The Sphere on 18 June 1921, it was later reproduced in Hutchinson’s Splendour of the Heavens (1923).

In June 1921, Einstein and his wife came to England, arriving in Liverpool from America on 8 June. On 9 June Einstein gave his first UK address on relativity to an audience of about 1,000 at the University of Manchester, where he was also awarded the honorary degree of Doctor of Science.

The following day, he went to London, where he was the guest of the former Labour Lord Chancellor and fellow of the Royal Society, Richard (Viscount) Haldane, who accompanied him to a meeting of the Royal Astronomical Society (chaired by Eddington) and then co-hosted a dinner for the Einsteins at his house in Queen Anne’s Gate with his sister. According to The Times, the following guests also attended: Randall Thomas Davidson, Archbishop of Canterbury; Charles Sherrington, president of the Royal Society; Frank Dyson, the Astronomer Royal; Joseph J Thompson, Eddington, Professor Whitehead; Ernest Barker, the Principal of King’s College; Lady Horner; Dr Freudlich; Edmund Gosse; Professor JS Haldane, Haldane’s brother, and Graeme Haldane, Haldane’s nephew. The Prime Minister was unavoidably prevented from attending. After the dinner, a number of other guests arrived for a reception, including George Bernard Shaw.

Over the following days, Einstein attended many other events (some with Haldane and some without), before returning to Berlin on 17 June. They included laying a wreath on Newton’s grave in Westminster Abbey on 13 June.